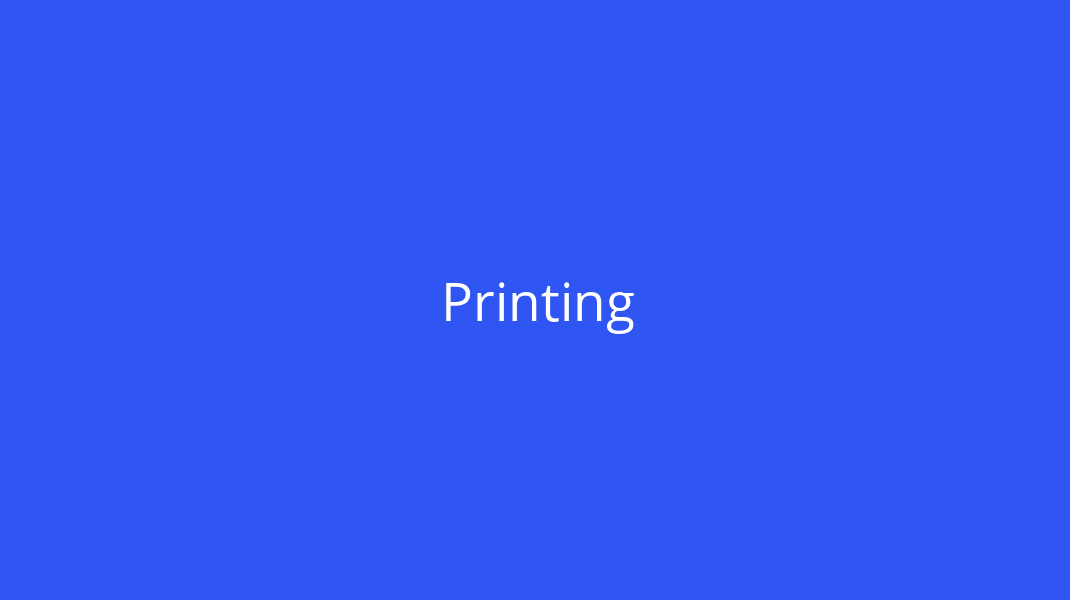 In the beautiful Shenandoah Valley of Virginia lies a state university with over 20,000 students and the country’s first college-level 3D printing classroom for general education. This is the first in a series of posts about how JMU 3SPACE got started, what we’ve done so far, and where we’re headed next.

Many universities have 3D printing facilities that serve individual departments or function as service bureaus or labs. In 2013, James Madison University built something brand new: a hands-on 3D printing classroom whose mission is to serve students of all majors and backgrounds. The classroom has eight stations, each with its own computer and 3D printer where students can do interactive work in groups. Over the last four years, the JMU 3SPACE classroom has supported 3D printing across the university curriculum by hosting general education classes, courses in mathematics and art, projects in history and biology, workshops for local K-12 school groups, faculty workshops, and even a 3D printing club. In this post, we’ll walk through how JMU 3SPACE went from ideas to equipment to curriculum, with the goal of providing advice for other schools that want to establish their own 3D printing classrooms.

In early 2013, the Engineering Department, the Institute for Visual Studies, and a few other sites on the JMU campus already had 3D printing experience and equipment, but in the Department of Mathematics and Statistics, we were just getting started. During the spring semester of 2013 we used Engineering and IVS facilities to run an independent study course on 3D printing mathematical objects, and began the process of converting a small closet in our own department into the JMU MakerLab for Mathematics and Statistics, with three 3D printers and two computers. In the MakerLab, students and faculty could 3D print mathematical objects to support research projects and create course manipulatives.

The MakerLab was fun, exciting, and opened right up into the hallway where students walked to their calculus and statistics courses. As a result, a lot of those students asked to have access to the MakerLab. However, we didn’t have enough equipment to serve such a large population, and we couldn’t give lab keys to students that weren’t majors in our department. We also lacked the staff and resources to help teach that many students how to design for 3D printing, and we didn’t want to just help people print things they found on the internet. We started dreaming of having a whole classroom of 3D printers at JMU, with access for students of all majors and the ability to teach people how to get started with 3D printing and design.

To build a new technology classroom you need two things: funding and space. The necessary funding isn’t much different than what you would need to install a computer classroom since 3D printers are somewhat comparable in cost to computers. We thought of our 3D printing classroom as a computer lab where half of the computers were replaced by 3D printers. The facilities we needed to install were also the same as what you’d need for a computer classroom: multiple wired internet connections, many grounded electrical outlets, security camera, swipe card door access, and a projection system for the instructor.

For us, it was securing the space itself that was the most difficult. University space is always at a premium, and we were asking to set aside an entire classroom 24 hours a day, 7 days a week, for 3D printing courses and workshops. Having a dedicated space for 3D printing was key to our mission, so that we could keep 3D printers set up and accessible all the time for hands-on activities, ensure the safety of the equipment, allow people to run prints that extended beyond class times, control access to the space, and run outreach programs from the classroom whenever possible.

If you’re trying to set up a 3D printing space at your own institution, make it easy for administrators to see exactly what you need and what value it will bring to your campus. Three things helped us immensely when making our case to the university for creating the JMU 3SPACE classroom. First, we had a detailed budget with price quotes, including some educational discounts. The budget for our initial classroom setup, including all equipment but not including facilities costs, was about $35,000. This sounded like a lot to us, but to the university this was actually a fairly reasonable amount to pay for an entire room of equipment. Second, we created a small 3D model and printed out multiple copies to give to administrators that might not have seen 3D printed objects before. The model is based on the JMU logo and can be used to hold business cards.  We call it the “JMU Cube”.

Third, we created a one-page inspirational handout that included concept diagrams of our computer-printer stations, a list of sample classes that one could imagine being taught in the space someday, a very brief copy of the budget, a list of some of the other universities that had already started 3D printing facilities of some kind, and text and references to help show the utility and relevance of building a new 3D printing classroom. This handout enabled us to put a piece of paper into any administrator’s hand to quickly represent the project. It also gave administrators a way to pass along information about our pitch without having to put together such a summary themselves.

In addition, we had a claim to fame that helped in our particular case: we knew that if we moved quickly, we could be the first general education 3D printing classroom in the country. Universities like to find ways to break new ground, and JMU 3SPACE gave us a way to establish James Madison University as a leader in the popular trend of accessible digital fabrication.

I’m not sure which of the above actually helped our pitch the most, but we were successful! Campus facilities identified an unused science classroom in a transitional building, and the university agreed to pay for converting the space for our needs. Here’s a before and after of the classroom:

For the major equipment, we decided to go with Mac desktops and Afinia 480 printers, which at the time were the smallest reliable printers we could find. We started out using ABS filament and then switched over to more classroom-friendly PLA a couple of years later, once that was possible on the Afinias. Over the years we’ve leveled up to some fancier equipment, including a couple of MakerBot Replicator 2’s, an Ultimaker 2 Extended+, a CubeX Trio, and a MakerBot Digitizer. Next semester we’ll be flipping to a fleet of Ultimakers, but more on that in another post!

Each station includes a computer, a 3D printer, and a box of post-processing tools, with a 3D printed Sharp Tool Holderto keep everything in place. We also designed and 3D printed a special fan grate to keep fingers and pencils out of the 3D printer fans.

A word of caution: the sharp platform-clearing spatulas and the curved X-acto knives have each done their share of damage on student and faculty hands. Nobody has ever been hurt by one of the 3D printers in our classroom, but lots of us have received scrapes and cuts from the sharp tools. We’ve since replaced them with tools that are less effective, but far less dangerous, such as this Cricut spatula.

If you’re setting up your own 3D printing classroom then something to keep in mind is that all tools are consumables. That is, they break and wear out, and you’ll need to replace them someday. Make sure to include these costs in your future yearly budgets so that you can refresh your tools when needed. You’re also going to run out of filament! Here’s how much filament we went through in a single year:

We kick off most of our classes with a 3D printer demonstration and safety training that involves printing “Quarter Traps”. Students insert a quarter halfway through the printing process and it becomes trapped within the model.

Coin traps are a great illustration of the process of additive manufacturing, and give the students something to take home after the first day and show to their friends and other teachers. While the models are printing we talk about printer safety and show the students how the design is constructed in Tinkercad.  We also use coin traps as a starting activity in our outreach workshops to local K-12 schools and clubs.

Students get really, really excited on the first day of class while watching the Quarter Traps print, and often take pictures and videos of the process with their phones. On a personal note, after teaching so much calculus I was really not prepared for the amount of joy and excitement involved with teaching 3D printing.

Of course, after having fun printing a pre-designed model, the next step is for students to design something themselves and print it. For software, we use anything that is free for students, which now includes pretty much everything from Autodesk. Our favorite classroom design tools include Tinkercad for getting started, 123D Design and Fusion 360 for going to the next level, OpenSCAD for exploring code-based design, and Mathematica for the math geeks. All of those are free except for Mathematica, for which we have some university licenses. We also routinely use Inkscape, MeshLab, Meshmixer, TopMod, Blender, Morphi, 123D Catch, Sketchup, KnotPlot, and Sculptris, depending on what projects people are working on. Most of the time our students come to us with no prior design experience, so we start them off with Tinkercad.  After attempting to print their first 3D design, their initial joy turns to… something more realistic.

Failure is perhaps the most important thing that students experience in our 3D printing classes. When their designs don’t work, the students don’t give up. They problem solve, discuss with classmates, and iterate their designs. The skill of failing - and then getting back up again - is naturally developed when studying 3D design, but not always natural in other subject areas. One of our main pedagogical goals is to empower students to learn to create and make, to learn how to learn on their own, and to learn how to fail and iterate productively.

By the end of the semester, these students - who come from every major on campus and have no previous design experience - make incredible things that they never imagined were “make-able” before. The picture below shows some of the final projects from our very first GSCI 104 class, and includes a working Ferris Wheel with hanging cars and a crank, a fully functional modular ukulele made to look like a flower, frames and signs, a mechanical Jansen leg assembly, geological models, custom drawers, and a mathematical Seifert surface for Borromean rings.

Since JMU 3SPACE opened in 2013, we’ve hosted lots of 3D printing classes, faculty workshops, outreach programs, and 3D printing projects in math, art, history, and biology. This spring we’ll be moving from our converted science classroom into the first floor of the main library on campus, and improving our 3D printing technology to a set up with Ultimakers that will enable us to make finer prints, take advantage of variable nozzle sizes, and experiment with multi-material printing. Our first batch of Ultimakers are already being tested at one of the JMU Library Makerspaces; in the picture below you can see some future high school teachers in a JMU Education masters degree class printing out 3D designs from their technology lesson plans.

JMU 3SPACE is now run by a team of four directors: Laura Taalman and Rebecca Field from the Department of Mathematics and Statistics, Jamie Calcagno-Roach from Innovation Services, and Daniel Robinson from the Institute for Visual Studies. In future posts we’ll all share more of our curriculum, projects, and progress, so stay tuned!